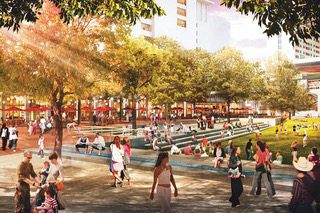 The history of Hemisfair Park began in 1968. Located in the heart of San Antonio, Hemisfair was created as a venue for the many great attractions that made up the World’s Fair that year. Hemisfair’s 147 acres made for a fantastic fairground, but shortly after the fair ended, the downtown park was largely abandoned by locals and tourists alike, and remained virtually unchanged for more than 40 years. Today, though, IES, along with other partnering organizations, are working tirelessly to restore and revive Hemisfair Park.

Visit Hemisfair Park now, and you’ll see that it has undergone a splendid revitalization, including Yanaguana Park complete with a new water park, fantastic new art installations, games, and a lush sand pit with brand new park equipment and a special children’s playground. Many of the 22 historic buildings on the Hemisfair campus have been restored to their original condition, and are a fantastic way for visitors to learn about San Antonio’s storied past. The Magick Theater, for instance, is a long-standing and beloved local staple, which has served the community since1895.

Hemisfair is the gateway to downtown: connecting the Institute of Texan Cultures to the Henry B. Gonzalez Convention Center (another IES project), as well as the John H. Wood, Jr. Federal Courthouse and the famous Tower of the Americas. Hemisfair Park is also within walking distance to many downtown attractions, like the Briscoe Western Art Museum, Market Square, St. Paul’s Square, La Villita, the Alamo, the historic King William District, and the newly-renovated Blue Star Arts Complex.. Hemisfair Park currently plays host to several public events, including gardening classes, story time for the kids (courtesy of the Magick Theater), as well as yoga and mindfulness meditations.

There are still 2 more phases of the park’s planned development to come, but thanks to the great work of many dedicated city leaders, urban planners, and yes, engineers, the new Hemisfair Park is already getting “rediscovered” and will continue to delight San Antonio locals and visitors for years to come.

Follow IES to learn more about our continuing work with Hemisfair Park and other great IES green space projects.